Ionisation sensing technology uses a manmade radio-active element, Americium 241. This element ionises the air around it and as a result, excellent conductivity is possible. Current passes through the gap with ease without causing alarm however in the event of particles arising from combustion or dust particles, it encapsulates the ionising air. This interaction causes an increased resistance to conductivity and therefore triggers the alarm.  Ionisation smoke alarms are best for detecting flaming fires. They are suitable for bedroom areas. 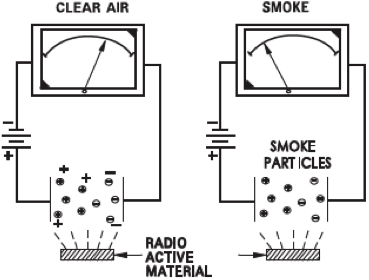 The main difference between a smoke alarm with a rechargeable lithium battery and a smoke with a 9V battery backup is the need to replace the battery every year. We would recommend rechargeable lithium battery operated smoke alarms are suited to infrastructures with high ceilings, or occupied by the elderly or the disabled as it will not require replacement of battery for the life of the smoke alarm, however we do still recommend the smoke alarm still be cleaned and vacuumed once in a while.

Where is the best location to install your smoke alarm?

We believe that having both photoelectric and ionisation technology in your home is the best option to detect the various types of fires that can occur.

In Class 1a buildings (eg. single detached dwellings, terrace houses, houses, villas, units, etc.) as a minimum it is required that a smoke alarm must be installed on or near the ceiling in any storey containing bedrooms, either between each part of the dwelling with bedrooms and the rest of the dwelling and in the hallways serving the bedrooms. A smoke alarm must also be installed on any other storey which does not contain a bedroom.

If it is a Class 1b building (eg. boarding house, guest house, hostel, motel, etc.), a smoke alarm must be in every bedroom and every corridor/hallway associate with a bedroom, as well as on every other storey without bedrooms.

Below is a location guide provided leading smoke alarm brand Lifesaver as well as a link to download the extract from the National Construction Code 2015. Please read about the Australian Regulations on smoke alarms as well.

The Building Code of Australia states that smoke alarms must be:

(a)    Located in:
i.      Class 1a buildings (a single dwelling being a detached house or one or more attached dwellings)
ii.      Class 1b buildings (boarding/guest house or hostel not exceeding 300m2 and not more than 12 people reside)

(d)   Interconnected where there is more than one alarm.

The smoke alarms must be installed in a Class 1a building on or near the ceiling in:

(b)   Any other story not containing bedrooms.

The smoke alarms must be installed in a Class 1b building on or near the ceiling in:

Need help with your smoke alarm?

How often should I be replacing my smoke alarm batteries?

Smoke alarm batteries should be replaced every 12 months. We and Fire Authorities suggest using the first day lights savings of the year as a reminder to change your battery. Note that some smoke alarms have a rechargeable lithium battery which will not require changing for 10 years.

My smoke alarm hasn’t lasted the 10 years I thought it would?

Depending on environmental factors and regular maintenance, your smoke alarm may not last the full 10 years.  Or it may last over 15 years. Either way, we do suggest that the smoke alarm is changed over at least every 10 years.

Why is my smoke alarm chirping for no reason?

The most likely reason your smoke alarm is chirping is because it is telling you the battery is low. If you have a 9V battery backup, please change over your battery to new one. If you have a rechargeable lithium battery – has your mains power been switched off recently?

Another reason why your smoke alarm may be chirping or alarming for no reason is due to Electromagnetic Interference cause by electrical noise or spikes. This could be caused by the installation of new LED lighting, Solar Panels or from appliances such as air conditioning, heating or fans. We recommend that smoke alarms be installed on its own circuit to avoid this. However, if this cannot be done, purchase an EMI filter.

What does the HUSH button do?

If your smoke alarm has false alarmed (perhaps due to cooking), you press the HUSH button to stop the smoke alarm from alarming. This will then initiate HUSH mode which is where it will chirp for 30-40 seconds for approximately 15 minutes, after which it will then reset. If the HUSH button is pressed, just wait out the 15 minutes until it resets back to normal.

Can I dispose of my smoke alarm in the bin?

The smoke alarms with ionisation technology have a minute amount of radioactive material in it. Disposing of it in your rubbish is no problem as it is a small amount and will have almost zero effect on the environment. Photoelectric smoke alarms can be disposed in your rubbish as well.

My smoke alarm won’t come off the ceiling!

Your electrician may have installed the “tamper screw” in the smoke alarm. The location of the tamper screw will vary on different brands. It can usually be found on the side of the smoke alarm. Simply unscrew this and then you can slide the alarm off.

Read about fire safety and protection here, and check out our large range of smoke alarms and fire safety products.